Our 2020 Scholarship application for a current local college student is available here with a due date March 27, 2020.

Our 2020 Scholarship application for a current local high school student is available here with a due date March 20, 2020.

NSBE Charleston has been awarding scholarships to deserving students in Berkeley, Charleston, and Dorchester Counties since 2013. We will be highlighting some of those students to celebrate them and what your support of the chapter has been able to accomplish. 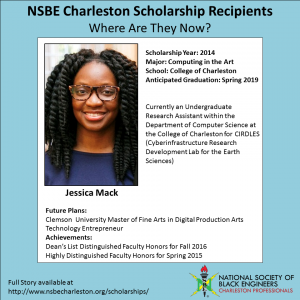 Hear from our 2014 Scholarship Recipient:

My current major is Computing in the Arts and my anticipated year of graduation is spring 2019. After I complete my undergraduate degree, I would like to go to Clemson for graduate school and complete the Master of Fine Arts in Digital Production Arts program, so that I can become proficient in animation. I chose my major because I am interested in merging the arts with technology in unconventional ways. I am especially fond of the idea of bringing animatronics and animated backdrops into theater. Eventually, I would like to own a business that focuses on bringing technology and the arts together through means like the combination of animatronics and theater shows after gaining experience in animation, as well as traditional arts fields so that I can efficiently and effectively bring the two worlds together.

Currently, I am an Undergraduate Research Assistant within the Department of Computer Science at the College of Charleston for CIRDLES (Cyberinfrastructure Research Development Lab for the Earth Sciences) and I have been with the lab from January 2015 to the present. I also served as an Introduction to Computer Programming Teacher for Girls Day Out in July 2015 at the College of Charleston, in which I had the opportunity to teach more than twenty girls how to use a visual programming language called Scratch. While at the College of Charleston, I have also had the opportunity to be featured on the Dean’s List Distinguished Faculty Honors for Fall 2016, which is awarded to students who were enrolled in at least 14 semester hours and earned a grade point average of 3.600 or higher in a single semester, and the Highly Distinguished Faculty Honors for Spring 2015, which is awarded to students who were enrolled in at least 14 semester hours and who earned a GPA of 3.80 or better in a single semester. While at the College of Charleston, I have also become members of the organizations Women in Computing, where I served as the Webmaster for August 2016 through May 2017, and SCAMP (South Carolina Alliance for Minority Participation), where I served as the Secretary for August 2015 through May 2016. As a member of the SCAMP organization I have had the opportunity to give two presentations in October 2015 and October 2016 about my position as Webmaster for CIRDLES. In these presentations, I discussed how I had to use tools like GitHub to host the website, learn version control, convert the website from HTML to the Markdown language, and collaborate with the application/software development sub teams of CIRDLES in order to make documentation to be published to the website for free open source software developed in CIRDLES. More recently, I have spoken at the Computer Science Research Speaker Series in October 2016 and January 2017, in which I presented with the rest of the CIRDLES team about my specific role as the webmaster, in which I discussed the same topics. In the future, I would like to work in the Computing in the Arts Virtual Production Lab, so that I can apply my animation and game programming skills and learn more about the applications of animation for my future endeavors.